Population pressure, a.k.a. anthropogenic pressure, often referred to in conjunction with the involvement of humans in the current extinction wave, characterized by Prof. David B.Wake graphically in one of his research paper about amphibians.

Our exponentially growing population literally consume species, especially marine species, occupy habitats and pollute everything on global scale. The rush for taking as much as possible from natural resources conducted so intense and widespread that it is difficult even to categorize the threats the ecosystem is exposed to by humans.

For everyone who has ever been concerned about deterioration of nature such observations became platitudes.

Population pressure has two major aspects. Firstly the number if individuals comprising the global population, currently over 7.4 billion, and secondly the per capita pressure on the environment claiming food, space to live, and space for waste and garbage disposal.

The summary figure in WWF’s Living Planet Report 2014 shows that the global ecological footprint had exceeded one planet Earth carrying capacity in 1970 and by 2010 it became 50% higher, mainly due to the increased carbon component.

Several interesting aspects of this figure worth discussing, for example the indicated nearly constant level of the fishing ground component. The changes in fish production could tell more about footprint than fishing ground. As soon as the capacity and technology is given to conduct fishing across the whole planet the fishing ground can grow only by creating artificial lakes on land, but on global level their size is insignificant. 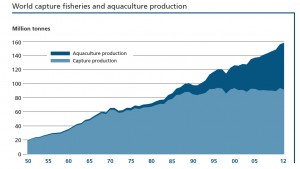 The State of World Fisheries and Aquaculture 2014 – Source: United Nations

An interesting information to point out from the figure above from UN is that the amount of global wild catch has remained nearly the same since ’90s, due to the fact that the wild fish populations had collapsed and simply there is no more to catch. What so far has been kept the catchment nearly on constant level is fishing down the food web of the oceans, meaning that fisheries take smaller and smaller fishes what was considered as by-catch few decades ago, because nothing else left.

Before drawing inferences from the WWF global footprint chart, let’s interpret the meaning of 50% over-exceeded carrying capacity of the Earth.

If human ecological footprint were equal to the carrying capacity of the Earth, it would mean that global consumption were equal to the yield by the planetary ecosystem services, concerning food, drinking water, and also space usage such as arable land, place for living building roads and storing waste.

Over-exceeding the carrying capacity can be interpreted only by concluding that humans consume not only the products yielded by ecosystem services but consume the yielding population as well. Simply put we eat not only the eggs but more and more chickens we expect eggs from.

On the other hand by claiming space for living, growing crops to eat and even more crops for livestock, building roads and holiday resorts we ruin habitats of all species including primary producers such as plants.

Based on the WWF’s global footprint chart human population had reached the carrying capacity of the Earth in 1970 by having 3.7 billion people. Now here we are 7.4 billion. Based on that we can say that the Earth has twice as much population as it can sustainably support, so it is two times overpopulated.

Let’s use the per capita GDP as an acceptable indicator for per capita consumption and approach the same issue from a different direction. The world average per capita GDP in 1970 was around US$ 800. In the USA 5,247 US$, the average of the European Monetary Union 2,256 US$.

The world average per capita GDP has increased 15-fold during the last 45 years.

It means that – on average – the world should drop the consumption level to the level of Niger in 2013 or to the level of Brazil in 1970, in order to stay on carrying capacity level of the planet.

But the situation as far as overpopulation is concerned is even worse.

In 1970 a huge number of people lived in extreme poverty.

Now let’s suppose that the average per capita GDP of the EMU countries in 1970 (2,256 US$) represented an acceptable living standard for millions, being nearly 3 times higher than the world average in 1970 (800 US$).

So it means that if the living standard of each and every ‘average citizen of the world’ had reached the average of the EMU countries, the carrying capacity of the Earth would have reached much earlier than 1970.

Given the fact that we now stand over the doubled population figure of 1970, the said conclusion is that if each of our fellow human inhabitant liked to enjoy the 1970 level of average living standard of the EMU countries, and at the same time we would like not to exceed the carrying capacity of the planet, than 3 * 2 = 6 planet Earth capacity would be required. But we have only one, overpopulated 6-fold, not to mention that people prefer to live on 2016’s living standard, they prefer to have smart phones, tablets, UHDTV.

The UN’s Sustainable Development Goals aims to deliver prosperity to each and every human being on this planet regardless of the amount of global population which leads to questioning the rational behind this promise.

The first step towards seeking the way out of this pressing situation is that people need to be facing with and accept the above facts in order to ask appropriate questions.

Similarly important is to educate people across the planet, from Africa to Asia, to South-America, about a) the finite nature of planet Earth and b) the fact that every single human being pose a consumption demand on this planet which seeks to be satisfied by ecosystem services – as long as such services exists.

After global human population becomes familiar with these constrains the possibility will be given to ask the question, whether total freedom of human breed is a viable choice, given that ecosystem services are effectively collapsing right now under the strain of population pressure today.

The good news is that people can be educated and infrastructure for education is widely available.

Why this is not happening?

Because birth control, family planning or planned parenthood are considered as taboos in major religions. And also because there is a massive interest behind population growth. Population growth can boost economical growth. It appears that those who benefit most from economic growth has no interest whatsoever in long term ecological balance of our planet, rather they seek short term benefit of ever growing number of consumers and decreasing value of workforce.