I’ve specialised in endangered, and often migratory, marine species, with my main focus being on sea turtles. I’m very experienced at remote atoll research and spend most of my life far from anywhere. I work closely with islanders, teaching them and their children how to use resources sustainably; they always have been able to, but now we also face global problems, such as overfishing and by-catch, on top of any traditional take.

My passion lies with Traditional Knowledge: I’ve spent decades working with tribal peoples around the world, learning their skills and Wisdom. I share scientific knowledge with them, which often agrees with their observations and findings over many generations. With permission I teach their children how to use traditional approaches, and particularly how to leave an abundant and diverse ecosystem for their future offspring.

I was educated at Bangor and Cork Universities, taking degrees in Marine Zoology; Marine Environmental Protection; and Marine Ecology. I have numerous publications, mostly on sea turtles; and I also advise governments in most countries where I work. 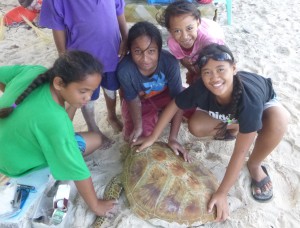 In 2014 I was asked to become the Inaugural President of The Biodiversity Alliance, which I consider to be a great honour. Thank you.

I have just organised a Science Fair at Omoka School, Tongareva Atoll, which turned out to be a remarkable success. The classes undertook locally-relevant science projects during Term 4: these culminated in Prize-giving, and the ‘Scientists of the Year award’. It was a real pleasure to help.

Scientists of the Year 2014 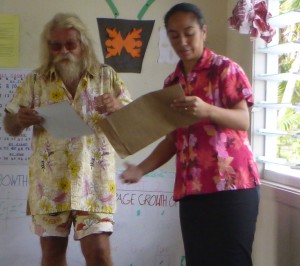