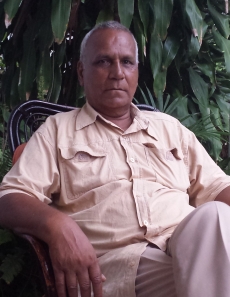 Born in Mauritius and trained in Forestry in the UK soon after High School, I returned to Mauritius and worked in the Forestry Services of the Ministry of Agriculture in major afforestation projects for a number of years. I was subsequently attached to a new Wildlife Project which had as main objective to save two endemic species of birds, the Mauritian Pink Pigeon and the Mauritian Kestrel, at that time on the verge of extinction, with only a few individuals left in the wild. The work was in collaboration with the World Wild Life Fund, and had the opportunity to work with Gerald Durrell, and the Durrell Wild Life Trust.

At some stage decided to go back to the UK for further studies and went through programmes in Woodscience, Material Science, Biodeterioration, Environmental Biology and Microbiology, eventually ending with a doctorate in Environmental Microbiology.

I have been involved in research and teaching in the UK for a few years, and spent some years working on the biological and microbiological decay and deterioration of timbers from the hull of the Mary Rose, with a view to setting directions as to its preservation. The Mary Rose, a warship of the English Tudor navy of King Henry VIII, which sank in the waters of the Solent, off the coast of Portsmouth, in 1545, and laid in the muds of the Solent until it was re-discovered in 1971. It was raised in 1982 and exposed in a Museum in Portsmouth.

I subsequently left the UK and took up a Lecturing/Professorship position at MOI University in Kenya, which also included lecturing at the University of Nairobi (Kenya), and at times at universities in Uganda, Tanzania and South Africa. I worked in close collaboration with the Departments of Fisheries, Wildlife Management and Environmental Sciences in Kenya, continued in research, mainly on the environmental and health and safety aspects and impacts of wood preserving chemicals. Results of the findings, together with the findings of other researchers from other parts of the world, eventually led to the banning of Copper-Chrome-Arsenate preservatives worldwide. A number of papers came out of the investigations and other studies in Kenya, which also resulted in attendance to a number of International Conferences. Whilst in Kenya, I also collaborated with some national and international organizations, including the Kenya Forest Department, the Ministry of the Environment, the FAO, UNEP, UNDP, USAID, GTZ, IDRC, UNESCO, and several National and International NGOs; and in South Africa, the Forest Owners Association (FOA), the South African Pulp and Paper Industry (SAPPI), the Council for Scientific and Industrial Research (CSIR), and the South African Wood Preservers Association (SAWPA).

Apart from lecturing, I was also involved in Curriculum Development, acting as external examiner in Tanzania, Uganda, and South Africa; developed a Curriculum for a Master?s Programme in Woodscience, and initiated a PhD Curriculum for a Doctorate Programme before I left. I have also been a Member of the Moi University Senate for over 10 years. Further, I initiated the formation of a national NGO to establish projects within the sustainable land use and agricultural practices domains.

I eventually left Kenya in 2008, landed in Mauritius in transit, where I have occasionally lectured at the University of Mauritius in Environmental Management. I have also, together with others, started a Company (EnviroSolutions Ltd), dealing mainly with environmental management. And now a Founding Member of the Biodiversity Alliance (BA).