Message From Dr. Ating
“We only live truly happily when we are in love – giving and receiving it. By helping the poor with my medical knowledge and skills I am expressing my love.

I also believe that wild animals and plants have the right to live in peace – which is why I see my duty to help them finding a safe place in this time of human greed and destruction. 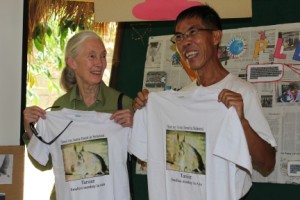 Hence my life goal is to work for the poor people living around National Parks in Indonesia – both with medical care and education, motivating them to preserve the habitat of the wildlife.”
– Ating Solihin, MD

1999 – 2002 Project Manager and Researcher US NAMRU-2 (United States Naval Medical Research Unit), Papua Provinces. A two-year study to find out the impacts of different geography, climate and ethnic groups of malaria epidemiology, and its correlation with protozoa and worm infections.

1998 – 1999 Researcher Menzies School of Health Research (Australia) in East Borneo and Papua Set up and ran a study to find out the role of Nitric Oxide in Malaria immunity.

1994 and 1996 – 1997 Public Health and Doctor SOS International in Freeport mine (Papua) and KPC Mine (East Kalimantan). Evacuated patients from remote areas in Papua and Kalimantan. Provided health service to the indigenous people living around the mine.

Set up electronic catalog for libraries of international schools in Bali and Lombok islands
Surgeon assistant and on-site doctor of Panti Rapih Hospital during the earthquake in Yogyakarta (2006, while on leave)

Refugee doctor in the Grand Valley of Baliem (2000)

Malaria consultant of the hospitals in northeast Papua (1999)

Emergency room assistant of the Hospital of the University of North Carolina at Chapel Hill, USA (1995)

The text and the images are copied from http://www.dratingfoundation.org/