This status and outlook synthesis just arrived, file is about 16 mb and available in several languages

This is a curious and concerning story. Later this month data will be released that underpin this. Are we seeing similar impacts elsewhere?

Thanks to James Borrell for his organisation; to Jessica Plumb for her interview; & most importantly to Ashish for his first-class fieldwork and all of those folk who have helped him along the way.

Although some people choose not to believe that evolution is real, there is good evidence that Darwinian adaptation is still unfolding. “Survival of the fittest” actually means that those who are the most adaptable to changing circumstances, are the ones most likely to pass their genes on to future generations.

Nature is like an angel investor in the global economy: financially significant, yet widely unknown. The global pharmaceuticals industry, for example, is worth some $640 billion. But few know that up to 50% of this market is based on the genetic diversity of wild species. Mangroves in Thailand are worth about $1,000 per hectare if exploited for wood. If left intact, the value of these coastal forests for flood protection, carbon capture and fish breeding grounds is more than $21,000 a hectare.

Often referred to as natural capital, nature?s infrastructure ? forests, river basins, wetlands, coral reefs and so on ? provides fundamental inputs to the production of all kinds of goods and services. A 2012 study by The Nature Conservancy and the Corporate EcoForum estimated that the environment provides some $72 trillion a year of ?free? support to the global economy. That?s more than four times the size of the US economy.

Meanwhile, UNEP reports that the use of these natural resources is generating environmental and social costs to the tune of $6.6 trillion a year ? costs that could climb to $28 trillion a year by 2050 if we fail to take action. So while we reap the benefits of nature, we are undermining its valuable inputs.

Two-thirds of the planet?s terrestrial and aquatic ecosystems are now significantly degraded due to human activity. Fishing, logging, mining and agriculture are all pushing more and more species to the brink. The fishing industry, for example, is likewise threatening the survival of many species of fish, including its latest victims: the Pacific bluefin tuna and the Chinese pufferfish.

Failing to account for natural capital is the quickest route to depleting the planet?s resources. And because so many businesses depend on nature, short-term stripping of its assets is accumulating a big backlog of risk for investors.

So how can we continue to benefit from our planet?s natural capital without driving it into the red?

An accounting system that improves economic information by incorporating natural capital can help.

Take fisheries, which support the livelihoods of millions of people around the world. Today, poorly managed fish stocks threaten the future of this important industry. According to the UN Food and Agriculture Organization?s (FAO) latest report on the state of the world?s fisheries, almost 30% of fish stocks were estimated as overfished in 2011, while fully fished stocks accounted for more than 60%. The World Bank and FAO estimate that better management of marine fisheries would not only improve the sustainability of this important food source but increase income by some $50 billion annually.

That?s a big opportunity cost. If you?re a financial institution looking to invest in this area, poorly managed fish stocks are a risky investment, and you will incorporate that risk into the price of your capital. For the fishing industry, an increasing cost of capital is a good incentive to improve the management of fish stocks.

But accounting for nature is not only about reducing risks. If nature is providing us with services, there is also a significant business opportunity involved. Consider the case of the Catskills and Delaware watersheds, which together provide New York City?s 9 million residents with 90% of their drinking water supply. In 1992, the city of New York decided that protecting these important watersheds was a better investment than spending $6-8 billion to build new water filtration facilities, and $300 million annually to operate them.

The numbers spoke for themselves. Protecting the watersheds required an investment of $1-1.5 billion over 10 years, which was financed by a 9% tax increase on New York City water bills. By comparison, building and maintaining the new filtration plant would have entailed a tax hike on water bills of 100%.

The world desperately needs a new financial system, one that recognizes nature?s enormous contribution to global economic growth and incorporates the full cost of generating wealth. Earlier this month, I joined the International Union for Conservation of Nature (IUCN) as director general. Stepping from global finance at the World Bank to nature conservation, I am struck by the urgent need for a united effort that brings these two worlds together and, in league with the business sector, creates this new system.

During my time at the World Bank, I helped start an initiative which brings together UN agencies, governments, NGOs and academics in a broad coalition to implement a natural capital accounting system in eight countries. The International Finance Corp, through its performance standards for environmental and social risk management in the private sector, is helping drive change among both companies and lenders. And the UN Statistical Commission recently adopted an international standard for environmental-economic accounting, which is being tested in several countries.

But to make significant progress, the private sector needs to come fully on board. IUCN, the World Business Council for Sustainable Development and the Rockefeller Foundation are focused on creating robust information and data that can help shift corporate behaviour to enhance and conserve natural resources, rather than deplete them. The World Forum on Natural Capital, taking place later this year in Edinburgh in the UK, will showcase just how far we have come towards integrating natural-capital valuation into decision making.

Last week I was at Davos, Switzerland, where leaders from government and business met to talk about the new global context, which was described as complex, fragile and uncertain. Wouldn?t a new financial accounting system that values and conserves the nature we depend on be just the thing to help us thrive in this new and challenging context?

A good news about releases of turtles in Louisiana waters. 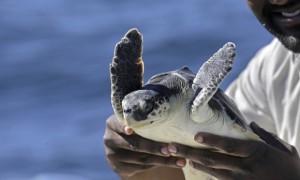 An endangered Kemp?s ridley turtle is held by Dr Tres Clarke, a veterinarian for the Audubon Nature Institute, as he releases it into the Gulf of Mexico, 24 miles off the coast of Louisiana. Photograph: Gerald Herbert/AP

A fresh report about why some many people over there believe that they have the right to get anything from the nature what they want.

We even have a smart new word to describe our destruction of animals ::: defaunation. How very sad 🙁

Nice story, shows how much we’ve still to learn about our world. New ichthyosaur ~ with a Gaelic species name

Just another interesting (only to me perhaps) info about these magic giants:

HuffingtonPost: Coconut crabs considered to be invasive in Hawai